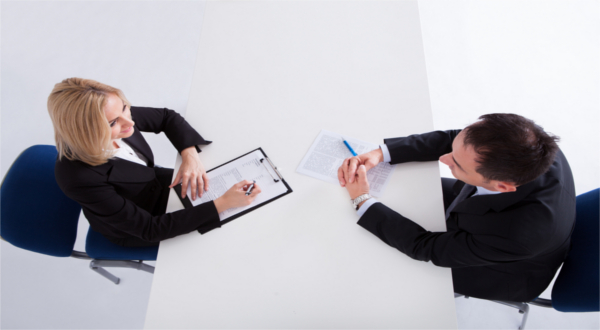 Part of our ongoing series to help you answer common behavioral interview questions.

There are many other variations on this theme and it is a very common interview topic. From the interviewer’s perspective, the idea is to find out about the candidate’s conflict management ability and general interpersonal skills.

One manager shared a memorable answer to “How would you handle a conflict at work?” A recent candidate responded: “I’d invite that person to meet me in the parking lot after work and sort it out man-to-man.”

Guess what? He didn’t get the job.

Before we tell you how to answer the question like a champ, here’s a little refresher on answering behavioral interview questions in general.

Most job interviews include behavioral questions (those questions that typically start with “Tell me about a time…” or “Give me an example of…” or similar).

With behavioral questions, interviewers seek examples of how you’ve handled specific situations in the past. The idea is that past job performance will say a lot about how you would handle yourself if hired for the job at hand.

Applytojobs.co.uk
Learn more about behavioral interview questions and some general advice on preparing for and answering them.

Why Interviewers Ask About Conflict

Most jobs require you to get along with different types of people. Some of your coworkers, managers, and/or clients will turn out to be idiots, slackers, and/or weirdos. Disagreements are bound to arise.

To succeed at work, you must be able to deal with conflict professionally. This is particularly true in certain jobs (project management, customer service, law) and in certain company cultures.

Your interviewer wants to get a sense of how you will respond to conflict. Anyone can seem nice and pleasant in a job interview, but what will happen if you’re hired and Gladys in Compliance starts getting in your face?

Conflict questions are common because everybody wants to hire a good “team player.” (It is probably the most common behavioral question subject) Interviewers often ask about your team experiences and they like to ask specifically about one that involved a conflict or “difficult person.”

How to Answer Behavioral Questions About Conflict

This type of question can catch you off-guard. After all, you’ve probably been focusing on how to talk about all of the positive and wonderful bullet points on your resume.

Nobody likes to talk about conflict at work. Most work conflicts are boring. Plus, you’d probably prefer to pretend that you are an absolute delight to work with and that nobody has ever had an unkind word to say about you.

A behavioral question about conflict forces you to talk about a less-than-delightful situation. It can be difficult to come up with a good example on the fly — and even more difficult to describe in concisely in a way that presents you in a favorable light.

This is why it’s important to prepare an example in advance using the S.T.A.R format.

The goal is not to script out an answer word-for-word. The STAR format allows you to structure the general shape of your response by jotting down bullets for each of the key aspects of the story.

Sample Answer — “Tell Me About a Time You Had a Conflict on a Team Project.”

Here’s an overview of how to use the STAR format specifically to present a conflict experience:

— Briefly describe the context for the conflict that arose. Provide just enough background information for context.

• I was managing the creation of our new corporate brochure and we were on a very tight deadline because we had to have brochures printed in time for a big upcoming trade show.

• I was in charge of delivering on time and I had to manage team members from Marketing, Sales, Graphic Design, and Product Management.

• The designer that was assigned to the project was very talented, but unfortunately missed a deadline that I assigned. When I approached him about it, he blew up at me.

These bullets provide good context — it was an important and complex project with a tight deadline. The designer not only missed a deadline, but threw a fit when called on it. This is a real conflict that could have led to disaster if handled poorly.

Tip: Don’t get too caught up in unnecessary details. The interviewer doesn’t need to know about the color scheme of the brochure, the history of the trade show, or the designer’s weird wardrobe choices.

— Talk about the key actions that you took. In the case of a conflict story, the focus should be on how resolved the disagreement in a professional and productive way.

• I was taken aback by his response, but I remained calm. I acknowledged that the deadlines were tight and explained again the reasoning and the importance of having the brochure ready for the trade show.

• He relaxed a little when he saw that I wasn’t attacking him. He told me about all of his other competing projects and how overwhelmed he was. I asked him if there was any way that I could help him come up with a solution.

• Eventually, we agreed that it would help if his manager had a better understanding of how important and time-consuming this project was. We decided we would speak with her together.

• She ended up assigning some of his other projects to another designer, which took some of the pressure off of him.

This candidate walks through the actions taken and why. He shows that he stayed calm under pressure, tackled the issue head-on, and was able to persuade others (the designer and his manager) to his point of view.

Tip: Again, stick to the actions that are most relevant and that show your conflict-management prowess.

— Every good interview story includes a happy ending. End your response with a description of the positive outcome(s) of your action. These results can be quantifiable (increased sales 20%, saved the company $25K) or anecdotal (The client was thrilled and sent my manager an email, my manager loved my approach and gave me a promotion).

• As a result, the designer was able to focus on the brochure and meet the deadlines.

• He apologized for his blow-up and thanked me for my help.

• We successfully completed the brochure in time for the trade show and received numerous compliments from both our own sales reps and potential customers.

• Our trade show presence led to $300,000 in new sales leads and I believe the new brochure played a key role in that.

This is a nice, concise happy ending. The candidate describes the resolution of the conflict, the positive effect on the relationship with the designer, and the business outcome.

• Choose an example that shows you taking an active approach to resolving an important conflict.

• Be specific. Don’t give a general answer like, “I deal with conflicts all the time and have learned to stay calm and that communication is key.” It’s boring and it doesn’t answer the question.

• Don’t choose a minor disagreement (“He didn’t want Italian for lunch”) or a conflict that was resolved by someone else or just went away without direct action. The idea here is to show off your interpersonal skills and problem-solving ability.

• Avoid examples that could make you look bad. For example, don’t share a time when your mistake or miscommunication CAUSED a conflict.

2. Get Specific About Your Actions

• The most memorable and compelling stories include enough detail to paint a picture. Show why this conflict was important and that you handled it capably.

• However, you must make an effort to keep the story concise. It’s very easy to go off on tangents (especially if you haven’t prepared in advance). Keep it focused.

• Stick to bullet points. Don’t try to memorize a script.

Take the time to practice telling your story. This is especially important when telling a story about a conflict.

Conflicts often lead to arguments, problems, and damaged/broken professional relationships. You want to feel confident discussing the sensitive details in a way that gets your points across.

Pamela Skillings is co-founder of Big Interview. As an interview coach, she has helped her clients land dream jobs at companies including Google, Microsoft, Goldman Sachs, and JP Morgan Chase. She also has more than 15 years of experience training and advising managers at organizations from American Express to the City of New York. She is an adjunct professor at New York University and an instructor at the American Management Association.